In this report, we will define luxury homes in San Francisco as houses, condos, co-ops and TICs selling for $2,000,000 or more. Homes selling in this price range currently make up a little more than 10% of the SF residential market; those selling for $5,000,000 and above constitute about 1% of the city’s home sales.

San Francisco Luxury Home Sales by Month
March 2015 saw the highest monthly number of luxury home sales in San Francisco’s history. Typically, this segment of the market doesn’t really hit its stride until April and May, which may indicate that spring 2015 is going to be very active.

Not shown on the chart, but if we compared our recent market with the previous peak of the market prior to the 2008 crash, home sales of $2m+ have more than doubled: Part of this speaks to the surge in affluence in the Bay Area, and part of it is due to recent home price appreciation. 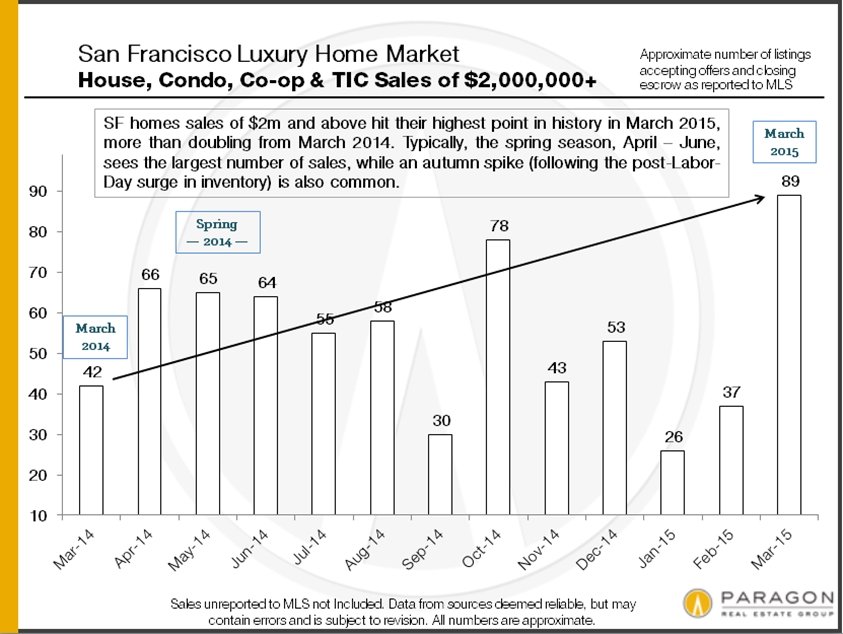 Median Sales Prices
for San Francisco Luxury Homes
As seen below, the Pacific & Presidio Heights neighborhoods still rule the roost for highest home prices. Part of this is pure location, but this is also an area where one finds very large houses, true mansions, and that naturally affects sales prices as well. Many of the runners up in this chart are very small markets, i.e. the number of luxury house sales can average less than 1 or 2 per month in Sea Cliff, Russian & Telegraph Hills, Jordan Park, Lower Pacific Heights and St. Francis Wood.

For buyers of larger houses, the greater St. Francis Wood-Forest Hill area offers comparably large and elegant homes, often on larger lots, at significantly lower dollar-per-square-foot prices. (See the following section below the next chart.) And many of the large, gracious, 3 to 5 bedroom Edwardians found in Inner/Central Richmond and Inner Sunset now sell for over $2m, but usually at lower prices than in the Lake Street and Cole Valley neighborhoods nearby. 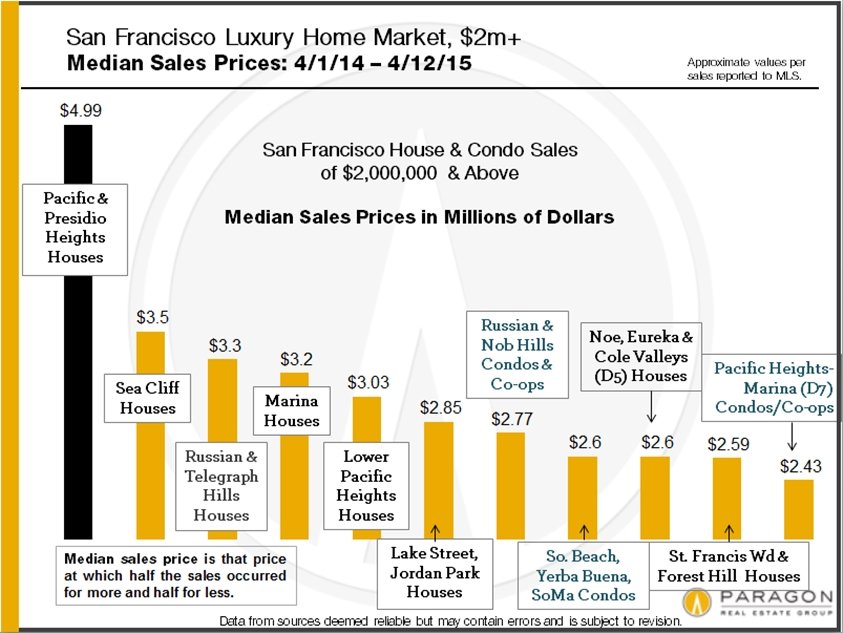 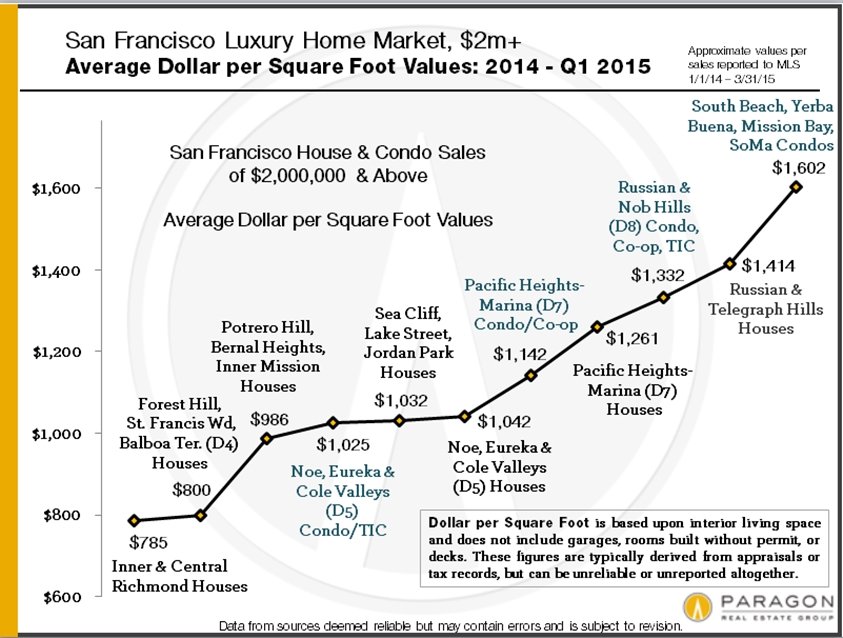 Shifts in Gravity
This chart tracks changes in percentage luxury-home market share by different districts of the city, and it illustrates a slow shifting of the market. The swath of established, prestige, northern neighborhoods running from Sea Cliff and Lake Street through Pacific & Presidio Heights to Russian & Nob Hills has historically utterly dominated high-end home sales. This area will always be highly prized and valued – it’s full of beautiful streets, homes, views and commercial districts – but now luxury sales are increasing much more rapidly in places like the Noe, Eureka and Cole Valleys district, and for luxury condos, the greater South Beach, Yerba Buena and Mission Bay district.

Part of the reason is proximity to where high-tech workers work in San Francisco and on the peninsula; another part is that many of the newly wealthy are relatively young and prefer a different neighborhood ambiance; and last but not least, the vast majority of new luxury condo construction is occurring in the quadrant of the city near to and southeast from Market Street. There is very little new housing construction occurring on the north side of the city. 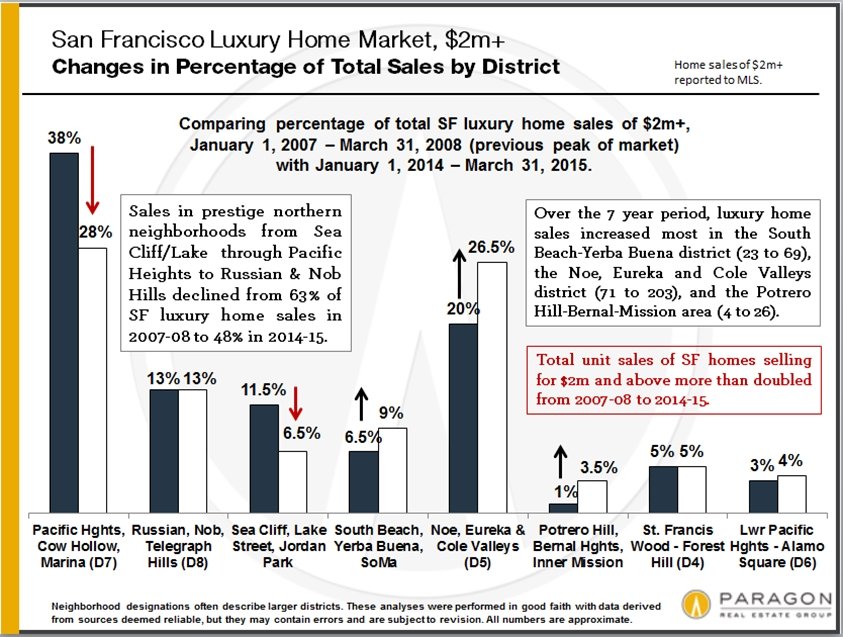 Not included in the chart above, but over the 7-year period, home sales of $2m+ also increased in the Richmond/Lone Mountain neighborhoods from 1.5% to 3% of total luxury home sales, and from 0% to 2% of sales in Inner Sunset.

Sales Prices to List Prices, Days on Market & Price Reductions
93% of Q1 SF luxury home sales sold without prior price reductions, averaging 7% above asking price and a very low 25 days on market: Indications of a strong, competitive market. However, this housing segment is also one prone to overpricing by sellers and listing agents, sometimes egregiously so: Of the 73 active $2m+ listings on the market as of 4/15/15, 51 have been on the market for 50 to 505 days. So buyers are snapping up many new luxury listings very quickly, but ignoring many others until price reduced (or simply withdrawn from the market).

Last but not least, it should also be remembered that the more expensive the home, the smaller the pool of qualified, prospective buyers: Sometimes, it simply takes longer to find the right one for a particular property, especially if it’s a little outside of the norm in some way. 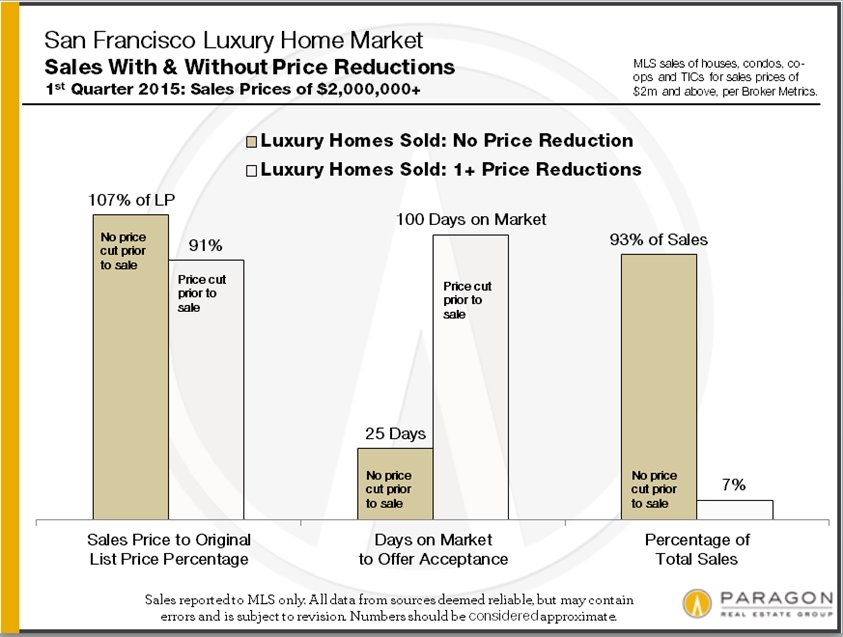 Luxury Home Sales by Bay Area County
Santa Clara County has by far the biggest luxury home segment in the Bay Area for two reasons: 1) Silicon Valley wealth, and 2) its population and housing market is well over twice the size of San Francisco’s, in an area 27 times larger.

Of San Francisco’s home sales of $2m+ in Q1 2015, 43% were condos, co-ops and TICs. SF is the only Bay Area county where luxury condos and co-ops play a significant (and increasing) role in the market. Less than a handful sold in all the other counties combined. 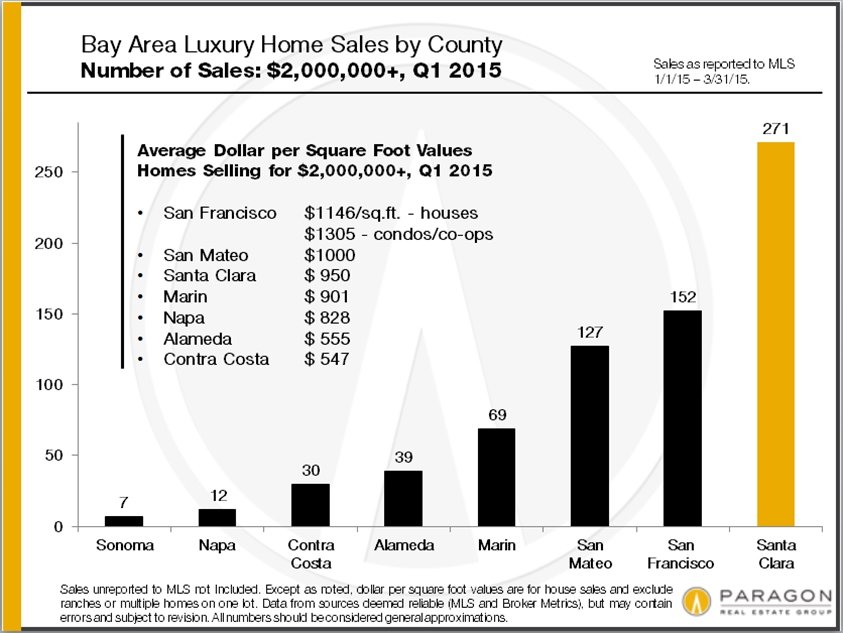 All data from sources deemed reliable, but may contain errors and is subject to revision. Statistics are generalities and how they apply to any specific property is unknown without a tailored comparative market analysis. Outlier sales that would distort the statistics were deleted from the analysis when identified. All numbers should be considered approximate.