Heading into the Holiday Slowdown after an Interesting Autumn Market

Median sales prices in October and November jumped back up to levels similar to the spring peak selling season. It’s important to remember that median prices are not a perfect reflection of changes in fair market value: They often fluctuate due to seasonal inventory and buyer-profile trends, as well as issues such as an influx of new-construction listings. It is the longer-term trend that is most meaningful – however we can say with confidence that there was clearly no significant “crash” in prices this past autumn. 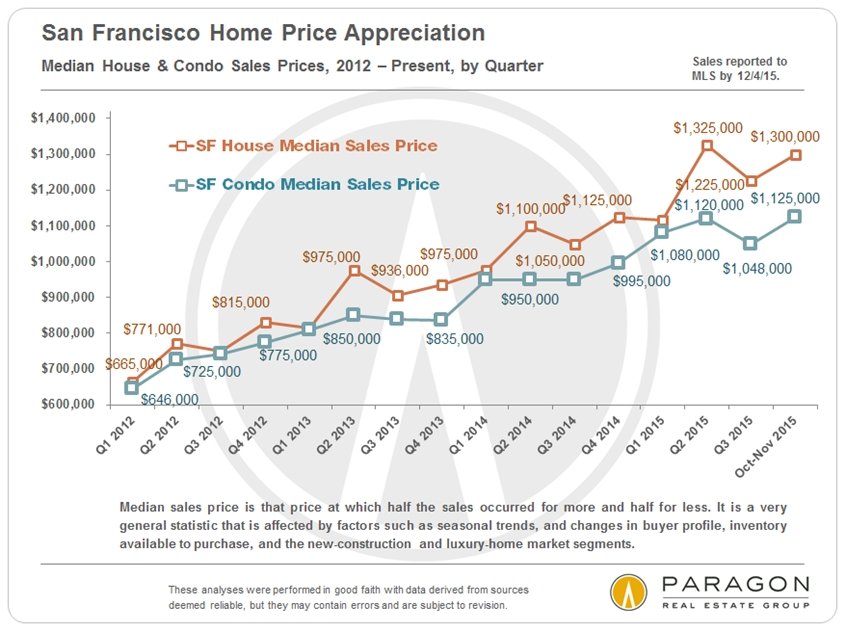 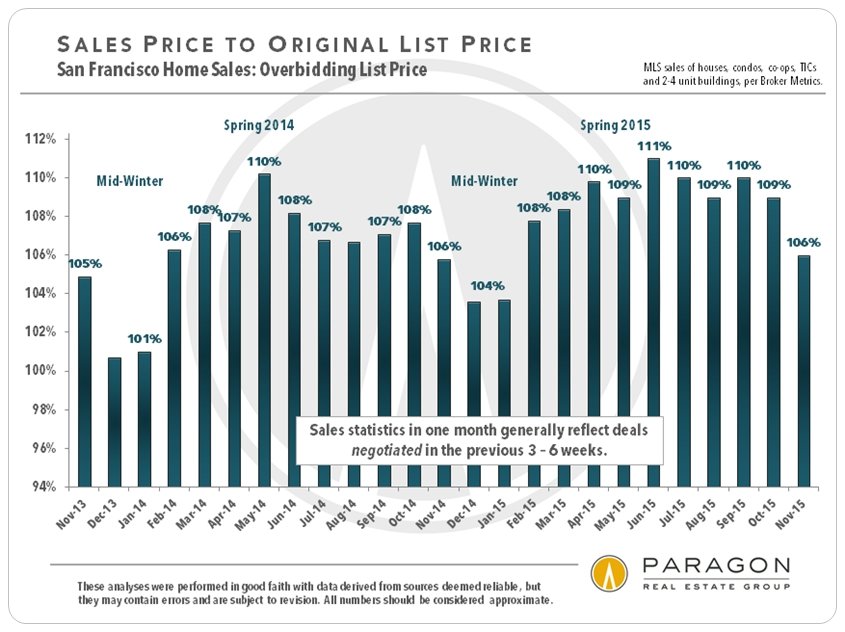 One indication of the heat of the market is the extent to which sales prices are bid up over asking prices.As is not untypical, the market becomes less competitive in November as it heads into the winter holidays. Still, an average sales price 6% over asking price would be considered crazy-hot in any other market in the country (though one also has to adjust for the fact that serious underpricing has become a not uncommon listing strategy in the SF market). 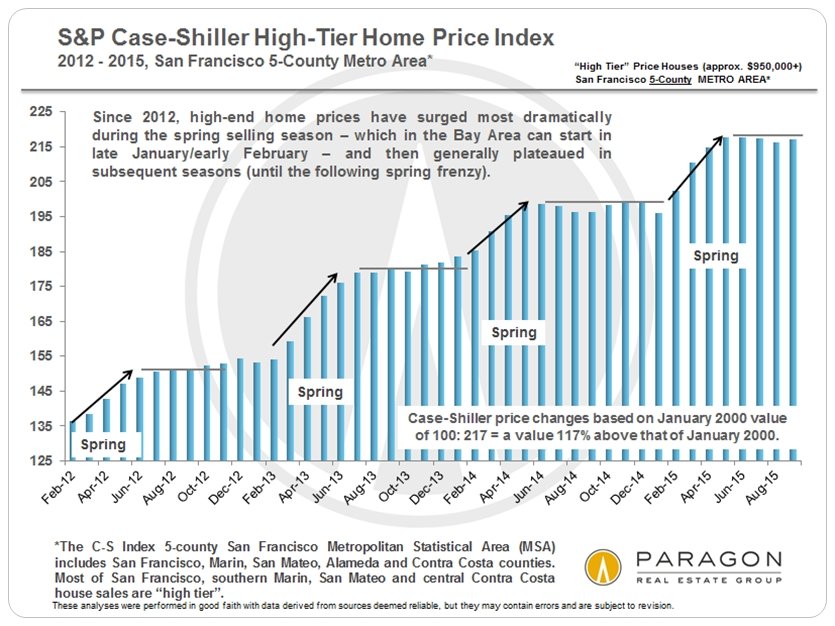 This chart based on S&P Case Shiller Home Price Index data illustrates the seasonality of home price appreciation in the past 4 years: surging in our feverish spring selling seasons, and then generally plateauing through the rest of the year. Note that Case-Shiller looks at home prices in a totally different way than median sales price trends, and probably reflects changes in fair market value more accurately. Case-Shiller Index numbers refer back to a January 2000 value of 100, thus the current Index reading for higher-priced Bay Area homes of 217 signifies home prices 117% above January 2000.

As we enter the winter holiday market slowdown, the next real indication of the direction of the market will come in the first quarter of 2016. Will spring 2016 repeat the overheated, high demand/ low supply frenzies of previous springs or has the market finally reached a longer term plateau or an inflection point? We shall soon know more. 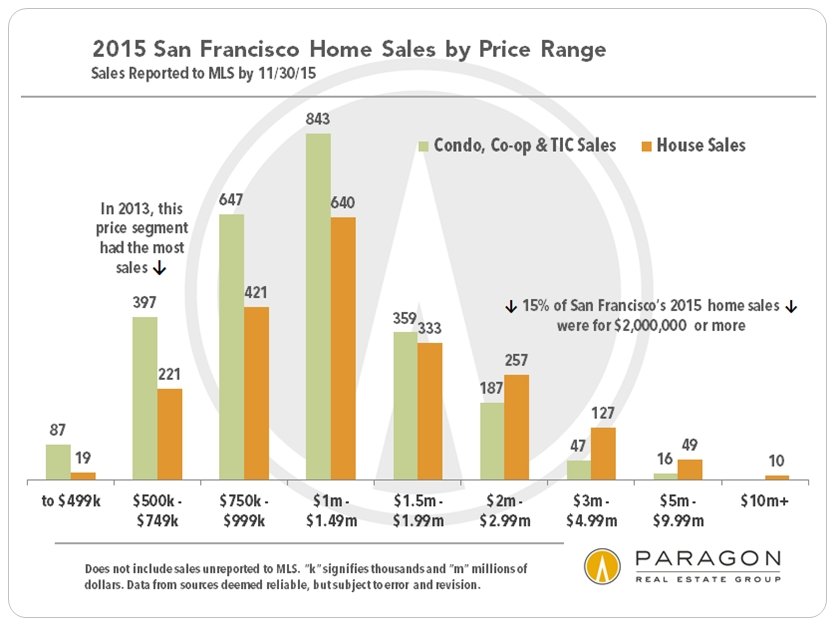 n 2015 YTD, the dominant price segment for home sales in San Francisco was $1,000,000 to $1,499,000. As seen in the first chart above, the median sales prices for both condos and houses fall within this range. Note the change from just two years ago. 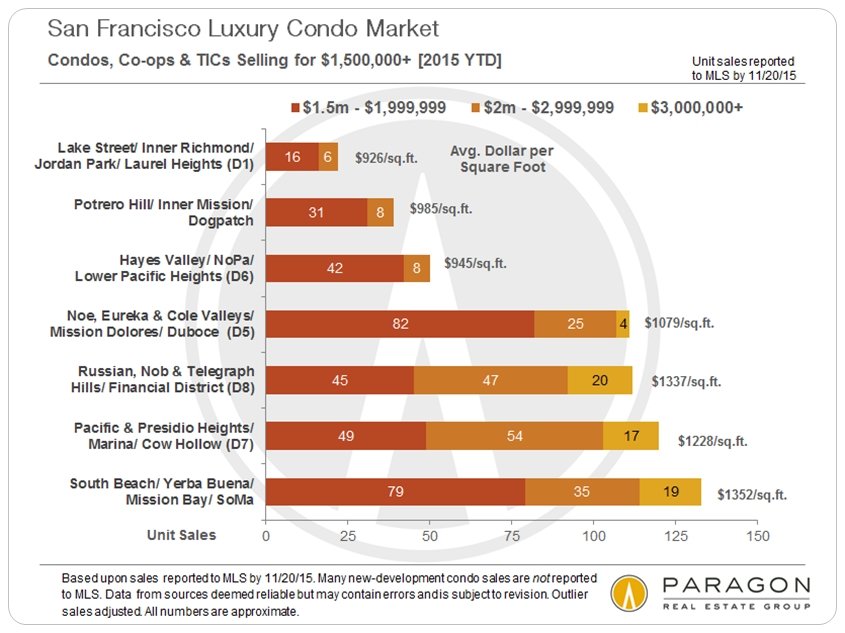 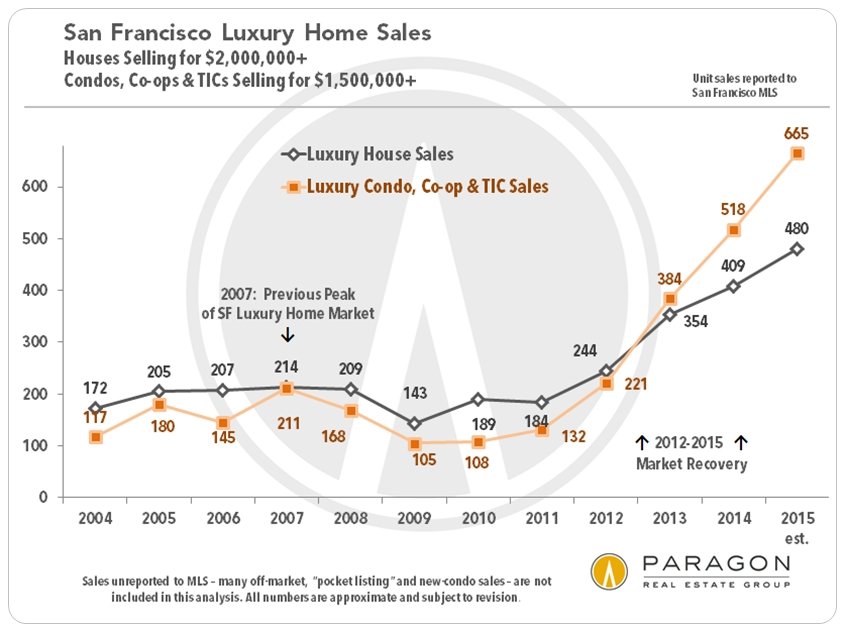 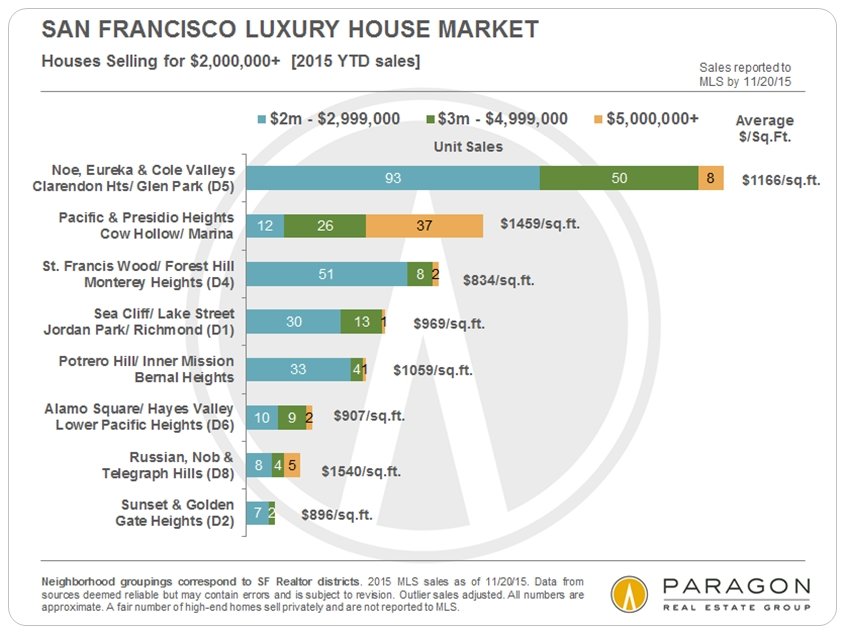 The high-end home market is the most seasonal segment in the city (as well as the most sensitive to sudden, large, negative movements in the financial markets). Market activity starts to plunge in November, hits its nadir in December, begins to pick up in the first quarter and then usually hits its peak in spring. Much of the center of gravity in the luxury market has been shifting in recent years from the city’s prestige northern neighborhoods to other districts of the city, such as the greater Noe Valley area and the South Beach/Yerba Buena district. This is not to say that the northern districts are not still both very expensive and considered highly desirable, and the greater Pacific Heights area still dominates the market for the most expensive houses in the city, i.e. those selling for $5m and more.

After the semi-hysteria – already half forgotten – that erupted in late August and September regarding the Chinese stock market and its impact on the U.S. stock market and economy, and possibly the Bay Area housing market, we thought it interesting to take a look back at how it has played out so far. 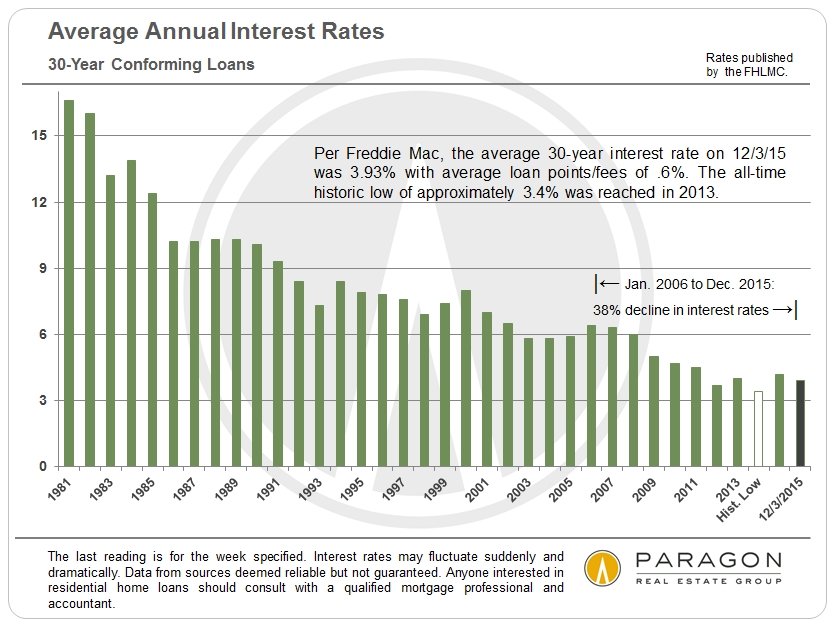 It is widely expected that the Fed will raise interest rates in December, probably by some minimal increment, but for the time being, as of the first week of December, rates have remained below 4%.

In November, we issued two mini-reports, one on Bay Area housing affordability and another on San Francisco new housing construction. Below are the featured charts and links to the full articles. 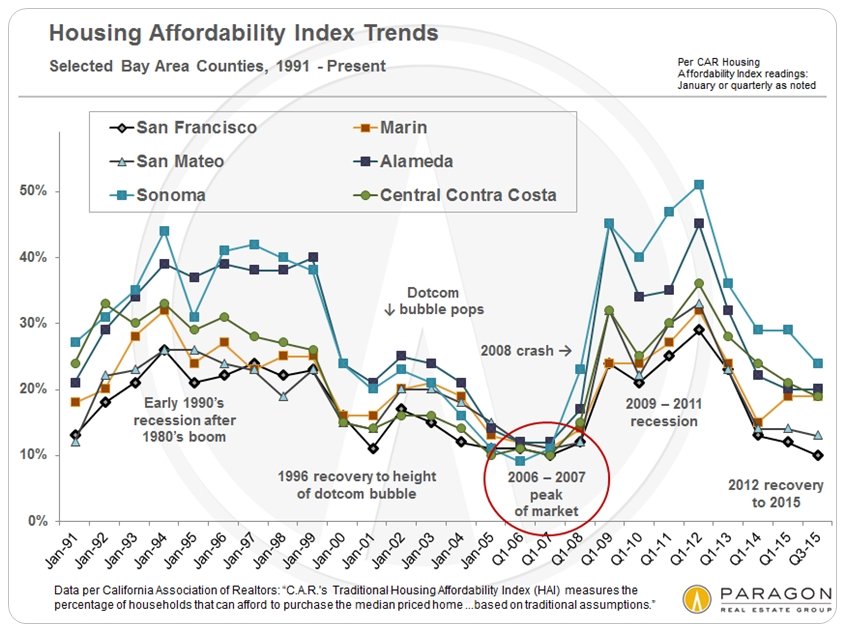 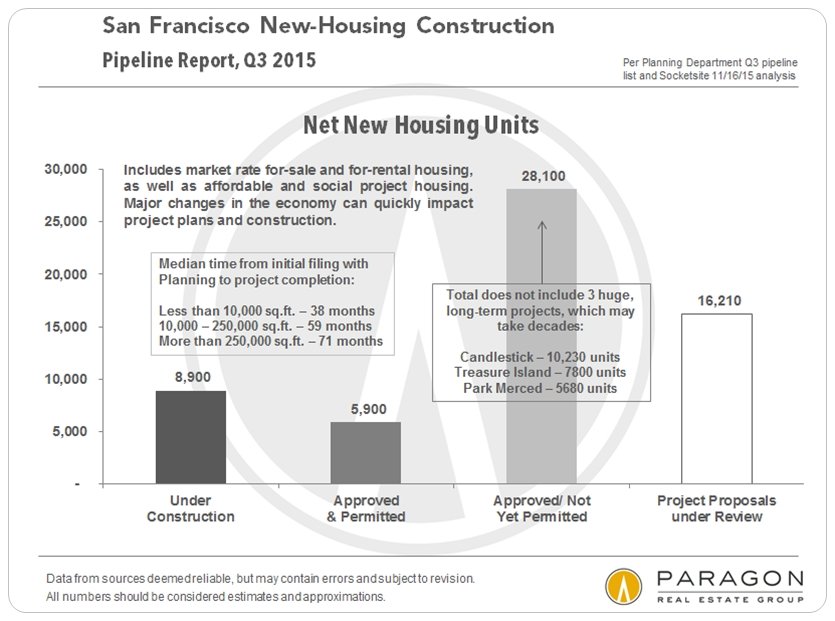